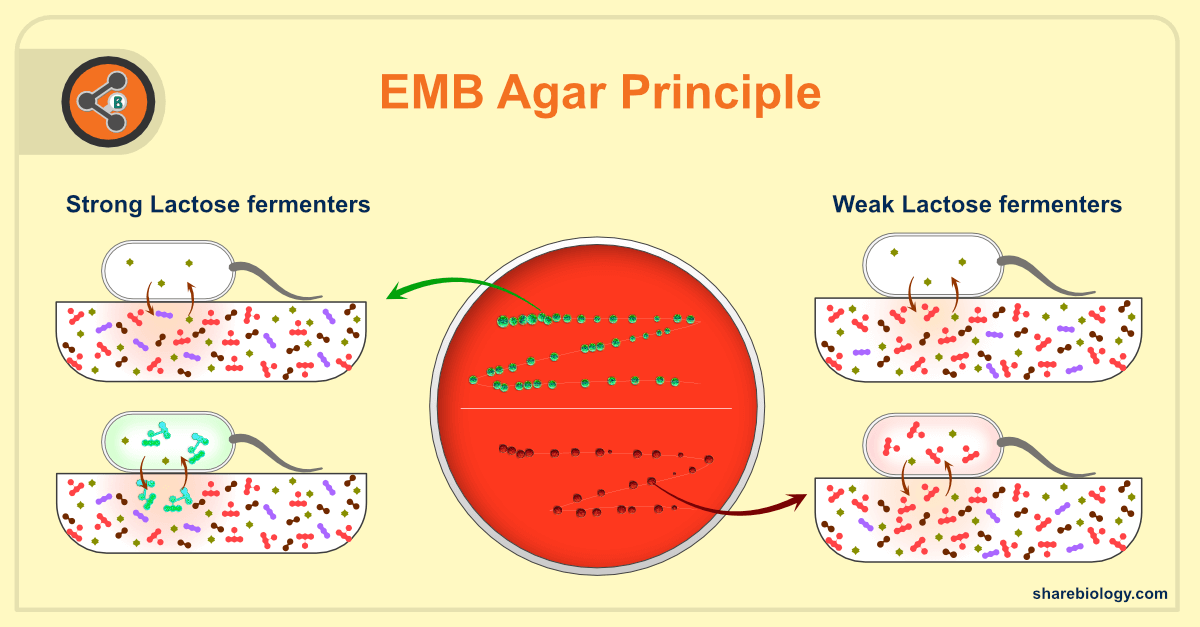 Eosin-methylene blue (EMB) agar was initially formulated in 1916 by Holt-Harris and Teague, to visibly differentiate between the lactose fermenting and non-fermenting microorganisms through the use of eosin and methylene blue dyes. The medium also included sucrose to differentiate between coliforms that were able to ferment sucrose more rapidly than lactose and those that were unable to ferment sucrose.

Later in 1918, EMB agar was modified by Levine to enable the medium to differentiate between faecal and nonfecal types of the coliform bacteria group. However, this medium differs from the one formulated by Holt-Harris and Teague in that it includes a single peptone as a base and supplementing it with dipotassium phosphate as a buffer and increased concentration of lactose and absence of sucrose. Salmonellae and other non-lactose- fermenters from the coliforms could also be differentiated.

In recent times, Bacto EMB agar which is a combination of the EMB agar described by Holt-Harris and Teague and Levine is being used. This medium contains lactose and sucrose (as formulated by Holt-Harris and Teague) and also contains peptone (peptic digest of animal tissue) and phosphate (as modified by Levine). The two indicator dyes, eosin and methylene blue, are used in a ratio to impart minimum toxicity while providing best differentiation.

Eosin Methylene Blue agar (EMB agar) is both selective and differential culture medium ideally used for isolating faecal coliforms. It is a selective medium due to inhibition of gram-positive bacteria by methylene blue. EMB agar's differential property comes from the eosin and methylene blue complex formation under acidic pH. People who are working on EMB media ask the following questions frequently.

To adequately address these questions, we need to dive into two fundamental studies. Following is the summary of those articles in biteable pieces.

Although the media was formulated in 1916, how it shows its differential properties were mostly unknown. In 1942, Wynne et al. given the first experimental proof behind the principle of EMB agar.

The hypothesis behind the EMB agar's differential staining ability is the degree of the bacteria to ferment lactose and produce acids. When the acids are released into surrounding media, pH drops results in acidic media. Although, many enteric forms can consume lactose (and sucrose) as carbon source and produce acids, the level at which they can drop the pH of the medium varies. Wynne et al. measured the pH of the following cultures after 24hrs of incubation in EMB broth supplemented with 1% lactose. The results of the experiments mentioned below. The pH of the media at the beginning of the experiment is 7.1

From the values mentioned above, one can infer that the level of pH change in the media is species dependent. In general, we may call the first three organisms to be fermenters, but the level of fermentation and type of acids they produce (corresponds to decrease in pH) varies. The difference in pH is the basis for the EMB agars differential staining capability.

To simplify the results, acid-producing bacteria (lactose fermenters in this case) take up Eosin, not methylene blue and bacteria that keep the pH neutral or turn it to base, takes up methylene blue but not Eosin. 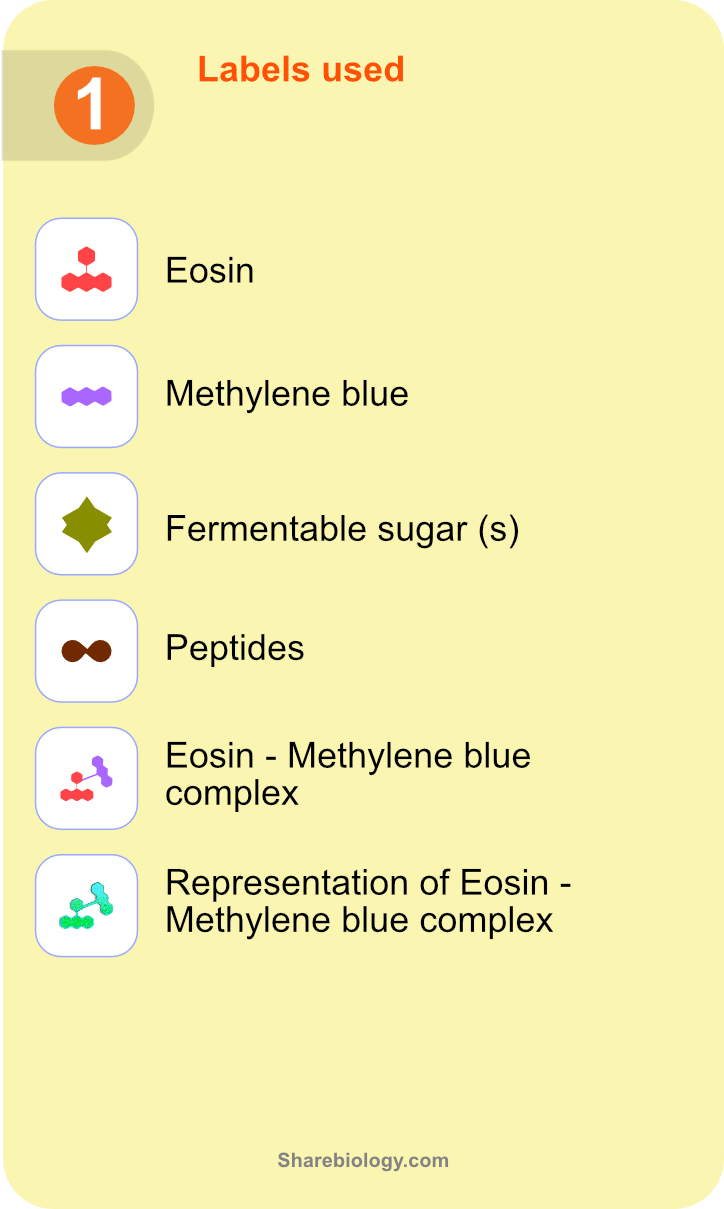 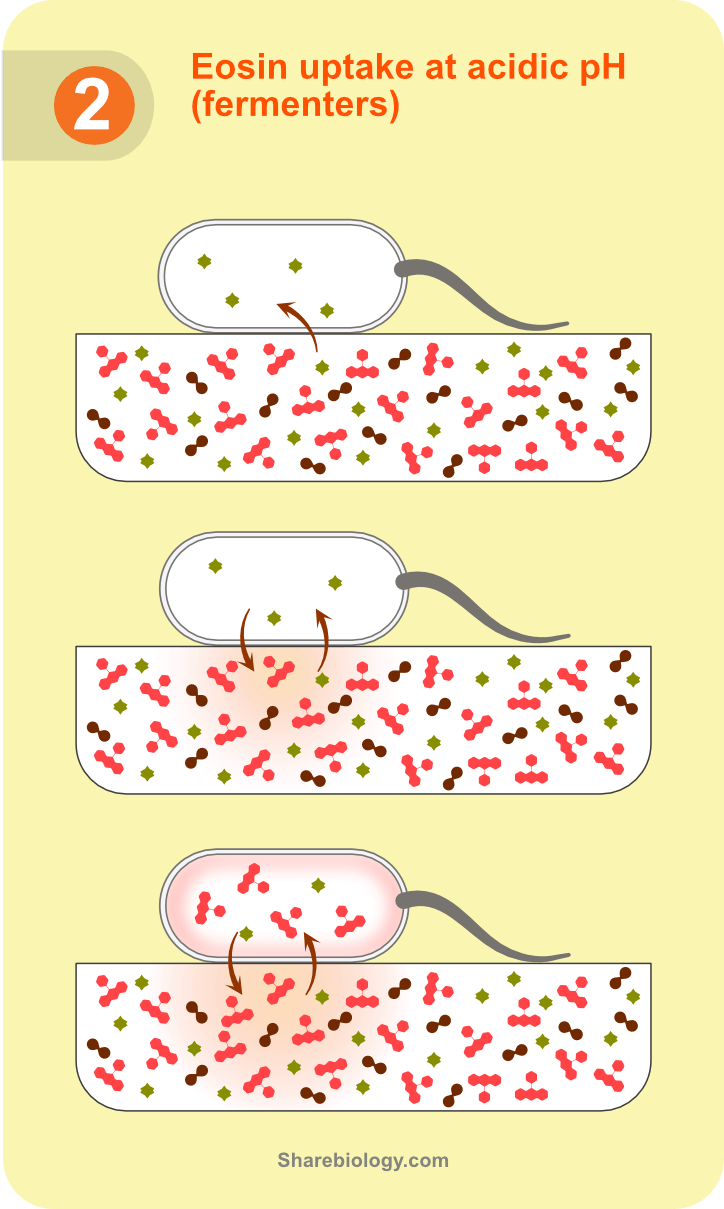 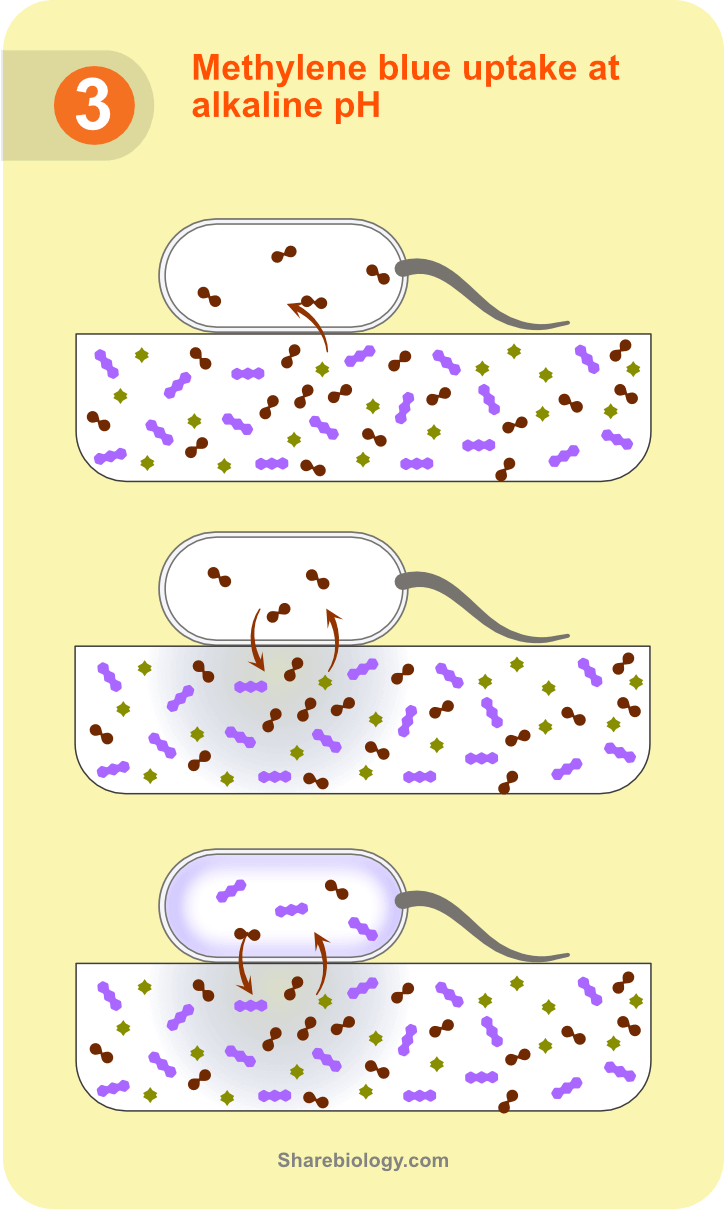 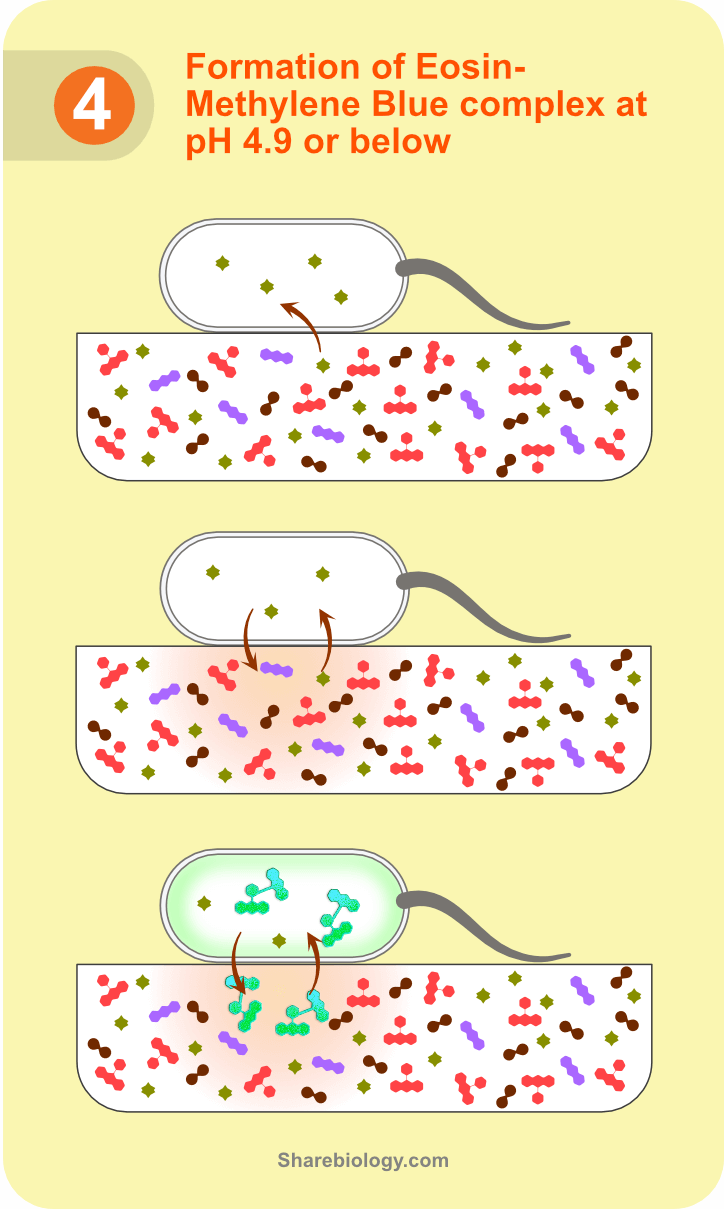 When media pH drops below a specific limit, Eosin Y and Methylene blue form a complex (Figure 5). Formation of this new molecule (called eosin-methylene blue complex) is associated with the green metallic sheen. Like eosin and methylene blue, this complex can be taken into the bacterial cells (Figure 4). The pH threshold was determined to be about 4.9. In other words, if any micro-organism can drop the pH of the media to 4.9 or below, can produce the green metallic sheen.

In one study conducted by R.S Horvath and M.E Ropp in 1974, made EMB media with strong buffers (resists pH changes). When E.coli was grown on this media, they fail to from green metallic sheen. Although the E.coli produces acids by fermentation, the acids can not change the pH of the modified-EMB media due to its high buffering capacity. Similarly, Enterobacter aerogenes (now Klebsiella aerogenes), a lactose fermenter which generally does not produce green sheen, produced green sheen on an unbuffered EMB medium. These findings further confirm that pH alone is responsible for the green metallic sheen formation. This research group also confirmed that the Eosin – Methylene blue complex is made up of one molecule of Eosin and one molecule of Methylene blue. In the complex, Eosin and Methylene blue connected by an amide bond (Figure 5). 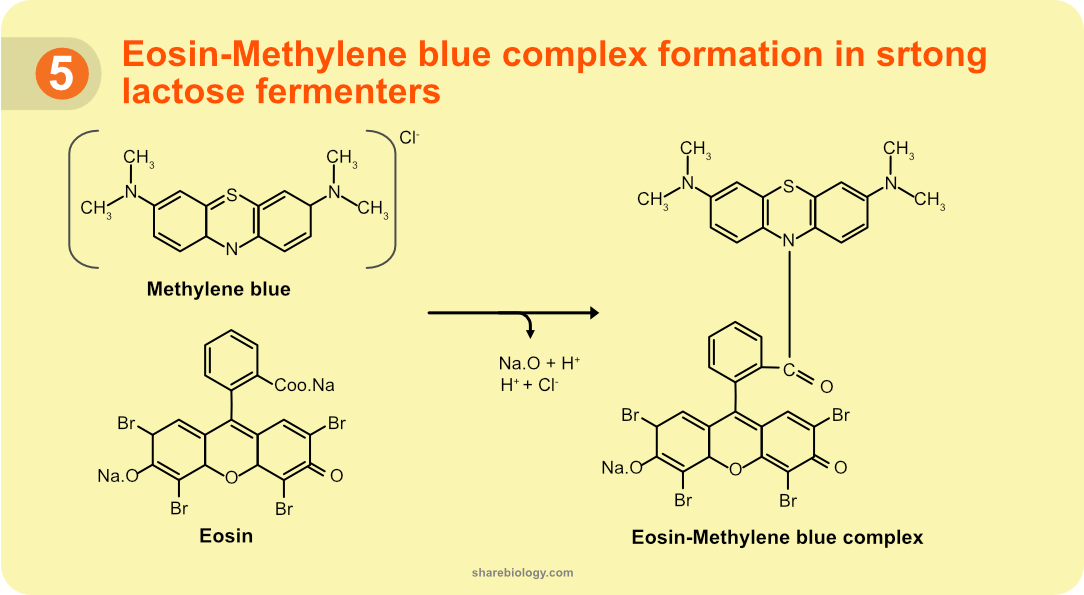 When the bacteria (lactose fermenters) failed to drop the pH below 4.9, they tend to take up the un-complexed Eosin dye (remember? acid-forming bacteria takes Eosin), thus results in pink/red coloured colonies. The colour of the colony differs from the centre to edge. The centre part of the colony being coloured, and the edge stays colourless. The reason could be, due to the difference in the density of the bacteria which in turn reflects on the amount of acid production.

On the other hand, if the bacteria increase the pH of the medium (turning to alkaline) would end up taking methylene blue into the cells results in blue colonies. They were capable of an increase in the pH by deamination of proteins. One can observe the increase in blue colonies, even by increasing the concentration of methylene blue in the media to 1:1 ratio or by making the EMB media initial pH between 8-8.5.

In summary, how a colony stains on EMB agar, is an interplay between the pH changes the bacteria brings in the medium, relative ratio of dyes and buffering capacity of the media.

Although the reasons mentioned above for the colony colour are relatively straightforward, it can be more complex in reality.

For example, strong fermenters can form EMB complex and takes up the dye. Since the Eosin is in excess, (6:1) and shown to be taken into cells under acidic conditions, plenty of chance to take up Eosin along with EMB complex. The amount of EMB complex and Eosin was taken into cells probably based on the pH drop in the media. This situation becomes more complicated when pH changes are linked to change in the colour of these dyes. All these parameters could be the reason for the presence of more colours (dark brown/pink/red) in lactose fermenters rather just green and red.

Alternatively, the commercially available EMB agar media powders can be used. Weigh the mixture of content as prescribed by the manufacturer.

Store the media plates at 4◦C until they are utilized. The test sample can be directly streaked on the medium plates and then the plates should be incubated, protected from light.

However, in order to obtain isolated colonies, standard procedures should be followed. A non-selective medium should be inoculated along with conjunction with EMB Agar. Identification of isolates should be done with further confirmatory tests.

Do not add agar at this point if you are preparing solid medium.

The pH of the media plays a critical role in the colony colour. Care to be taken to keep the pH to the recommended value.