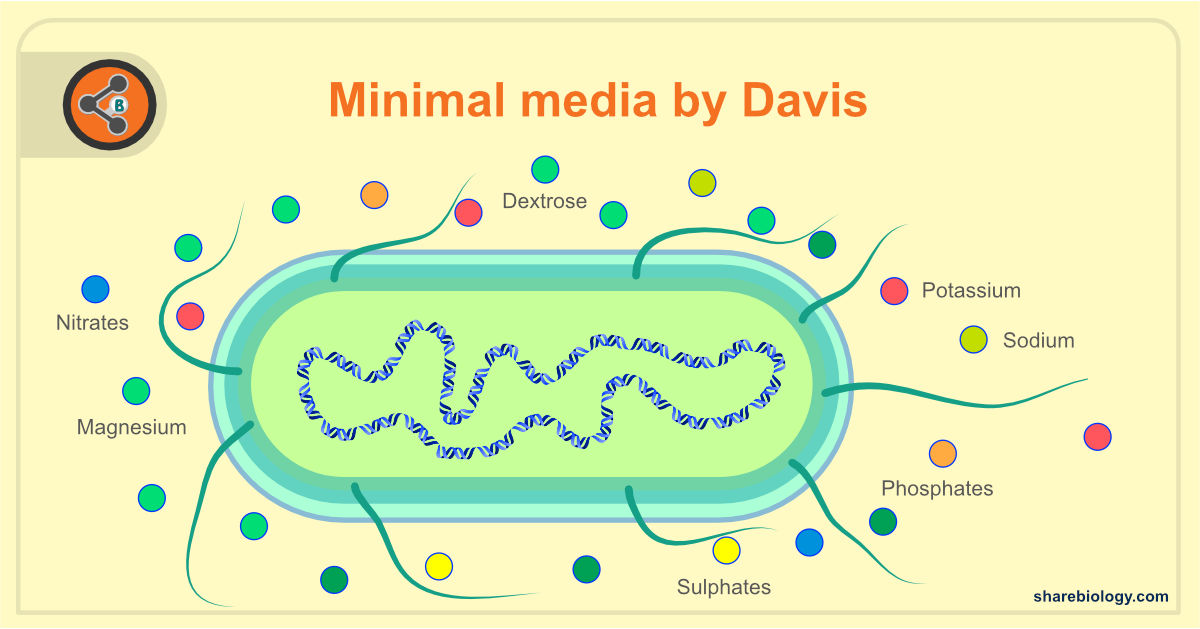 Minimal Broth (first formulated by Davis) is a cultural media with minimal necessities, generally without the presence of amino acids to support the growth of a wild type of microorganisms (e.g. wild type of Escherichia coli)

Minimal media with a single selected agent (either an amino acid, vitamins, nucleic acid, sugar or any other substance) is labelled as supplementary minimal media. And is used to culture-specific lines of auxotrophic mutants (microorganism which requires a specific substance to proliferate, not required by wild-type organisms e.g. nutritional mutants of E.coli which are obtained when the wild type of E.coli is exposed to UV radiation).

Minimal media is a defined medium with the composition varying on the microorganism being cultured. Typically, this medium contains a carbon source such as a sugar/succinate, various inorganic salts (salts of essential elements like magnesium, nitrogen, phosphorous and sulphur) and water.

The sugars act as carbon and energy source, and phosphates act as a buffering agent while magnesium and ammonium salts serve as sources of ions that stimulate metabolism.

Comparisons between the growth of microbial culture and its mutant form under optimal conditions, in minimal media and supplementary minimal media allows differentiation of wild type cells and mutant cells. The nutritional supplements that are to be added to minimal medium depend upon the type of mutant to be screened as for amino acids, vitamins, nucleic acids or other substances. This difference in growth between the two media indicates a mutant for that particular factor.

Alternatively, the commercially available minimal agar media powders can be used. Weigh the mixture of content as prescribed by the manufacturer

Some of the reagents have a tendency to precipitate. If you observe precipitation, please do filter sterilization instead of autoclaving.

Store the media plates at 2-8°C until they are utilized. The test sample can be directly streaked on the medium plates and then the plates should be incubated, protected from light.

Prepared Broth Media can be stored at 2-8°C for about 6 months to 2 years and do not allow the products to freeze.