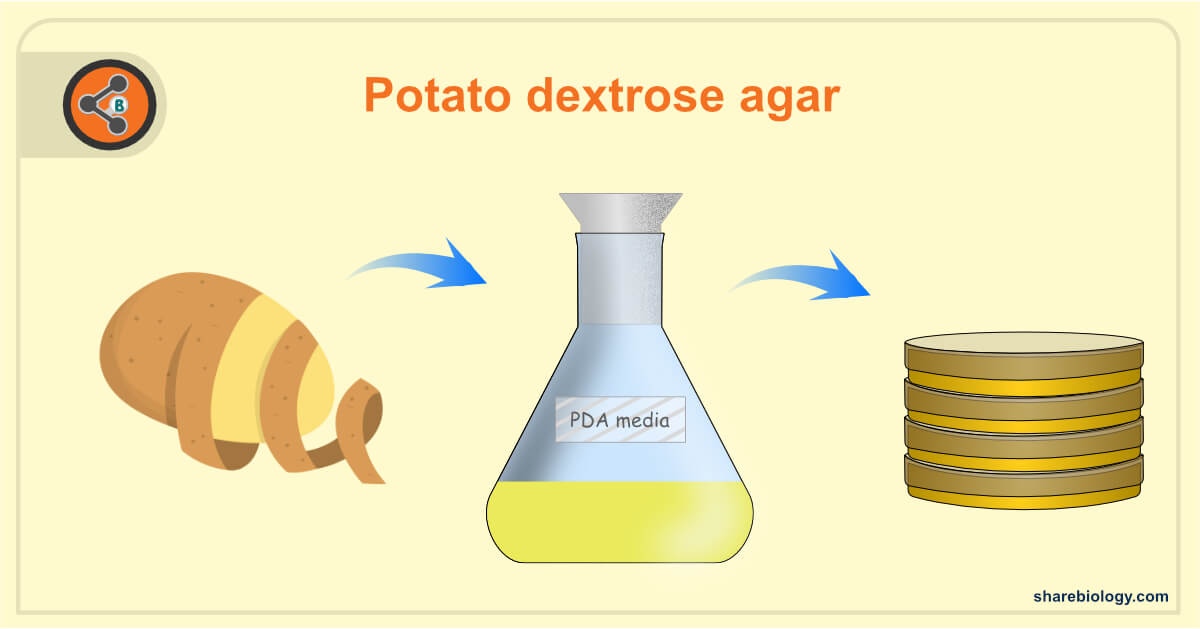 Potato dextrose agar often abbreviated as PDA. Most mycologists widely use it as a general-purpose medium for yeasts and molds that can be identified to some extent based on their morphological features and their pigmentation in culture often being important for identification of cultures. PDA thus aids in cultivating and differentiating pathogenic and non-pathogenic fungi.

Potato Dextrose Agar is a frequently used microbial growth media for cultivation of molds, yeasts and other fungi. It is made up of potato infusion and dextrose (a.k.a glucose). The potato infusion and dextrose as a carbohydrate source support the luxuriant growth of fungi and bacteria and is observed to encourage mold sporulation and pigment production in certain dermatophytes. However, the media may be supplemented with selective agents such as acids (e.g. tartaric acid) or antibiotics (e.g. chloramphenicol, or chlortetracycline) to inhibit the growth of bacteria that can impede the yeasts and mold. Agar acts as a solidifying agent.

In 2007, an article published in FEMS Microbiology Letters, stated importance of copper as suppliment to to achieve good coloration of fungal cultures on PDA media. The authors reasoned that the sufficient amount of copper is essential for the activity of enzymes involved in pigment production. They also showed that there is a batch to batch variation in copper amount in both commertially available and lab made PDA media. For more information follow the reference.

The pH of Potato Dextrose Agar medium is about 5.6+/- 0.2. Use HCl and KOH for the pH adjustment.

The preparation of the media by using the above raw materials is rather tedious. Hence in recent times, the infused form of potato is being replaced with commercially available potato starch/extract powder.

4 gm of the potato extract powder is equivalent to 200 gm of potato infusion.

Alternatively, the commercially available Potato Dextrose Agar media powders can be used. Weigh the mixture of content as prescribed by the manufacturer.

Store in dark at 2-8ºC. Plates may be used for one week when stored in a clean sterile area.

Heating Potato Dextrose Agar after acidification should be avoided as it may hydrolyze the agar and may destroy the solidifying properties.

Since PDA is a general-purpose and not a differential medium only presumptive identification is possible by observing colony morphology. Microscopic examination and biochemical tests should be followed to identify isolates to genus and species.