Basis of gene expression and regulation

All living organisms reproduce and transfer their genetic information to their offspring. Cells which are the basic functional and fundamental units of all the living organisms store the genetic information in the form of DNA, this information is transcribed into RNA and finally to proteins [1]. Proteins form the basic building blocks of the cell. This flow of genetic information from DNA to RNA (transcription) and from RNA to protein (translation) is called as gene expression and is the central dogma of molecular biology [2]. Gene expression is a highly regulated process that permits cells to respond to its changing environment by letting the cell to express specific proteins in different quantities as and when required [3].

Regulation of gene expression involves many mechanisms at different steps of expression, and one significant step in which gene expression can be regulated is after RNA synthesis and before translation into protein where RNA is modified/processed [4]. This process involves the cleavage at the 3′-end of an mRNA followed by the addition of a long adenosine (polyA) tail in a process called polyadenylation [5,6]. Polyadenylation is carried out by poly(A) polymerases in a multi-protein complex that comprises ~85 RNA binding or regulatory proteins [7]. The development of modern technologies has revealed an ever-increasing number of diseases linked to defects in mRNA processing [8,9]. Moreover, regulatory RNA binding proteins (RBPs), mRNA processing factors, or mutations that affect the function of a particular RBP are seen in various cancers, cardiovascular and neurodegenerative diseases [10].

We mainly investigate the mechanism of post-transcriptional RNA processing especially at the 3′-end of an mRNA, and its involvement in cardiovascular diseases or conditions (mainly cardiac hypertrophy and heart failure). We particularly focus on a poly(A) polymerase called Star-PAP that selectively polyadenylates mRNAs involved in oxidative stress response, apoptosis, cancer, and cardiac diseases [11]. The amazing fact about Star PAP is that it regulates a diverse array of cellular functions through the unique RBP or regulatory proteins present in the processing complex that determines the specificity of target mRNA selection.

Regulation of gene expression in the heart

Cardiovascular diseases (CVDs) are considered one of the major causes of mortality worldwide [12]. We know that the heart is a muscular organ whose major function is to pump blood throughout the body and supply oxygen/nutrients that the body requires [13]. Cardiac cells (Cardiomyocytes) constitute around 35% of all cells in the heart [14]. Before birth, heart cells divide and increase in number in a process called proliferation that accounts majorly for the pre-natal heart growth. Soon after birth, heart cells lose their capacity to proliferate, so the growth of the heart is achieved majorly by an increase in cardiomyocyte size, a process known as cardiac hypertrophy (CH) [15]. Moreover, during unfavourable stressful conditions when the heart needs to function harder, cardiomyocytes do so by increasing their size. This results in an unwanted heart condition called pathological CH [16]. If the heart continues in the hypertrophic state for a longer time, the heart ultimately fails to function leading to heart failure [17].

Gene expression pattern seen during cardiac hypertrophy resembles those of the heart during prenatal developmental stages [18]. So, this phenomenon is known as fetal gene programme reactivation [19]. Overall, the development of CH/HF condition results in changes in the regulation of cardiac gene expression [20]. Hence understanding this altered cardiac gene expression and its mechanism is critical for finding a preventive measure for hypertrophy and heart failure. With the advancement in technologies in recent years, more and more studies have focussed on RNA binding proteins (RBP’s), their RNA targets, and the disruption in mRNA processing or other modifications during the diseased condition [21]. The consequences of mRNA-protein interactions and processing events are largely undefined, and to define the mechanisms involved in heart failure and other diseases is a major challenge for scientists all over the world, for developing preventive or therapeutic measures [22].

Pre-mature mRNAs (pre-mRNAs) are covered by a large group of RBPs, and they determine the fate of RNA in the cell [23]. RBPs interact with their target mRNA at its UTR region and other sequence-specific regions, thereby affecting the gene expression [10]. Regulation at the 3′ untranslated region (UTR) of mRNA plays a crucial role during cardiac hypertrophy and heart failure [22]. Interestingly, 3′-UTR controls the expression of genes encoding various pro and anti-hypertrophic factors, yet the role of 3'-UTR regulation or critical factors involved in heart failure is poorly understood. We found that Star-PAP is enriched in the heart and acts as a major poly(A) polymerase (PAP) involved in cardiac gene expression. However, the role of Star-PAP and how it regulates the cardiac gene programme were still not investigated. Hence, we hypothesized that Star PAP regulates cardiac conditions such as hypertrophy or heart failure through its unique associated factors present in the Star-PAP polyadenylation complex.

Our study identified RNA binding protein, RBM10 from Star PAP complex and established RBM10 as a central player of CH/HF. We discovered a new anti-hypertrophy mechanism in the heart mediated via RBM10-Star-PAP nexus. We found that both RBM10 and Star-PAP are highly expressed in the heart. The genome-wide study further explored that both regulate a large set of genes related to CH/HF. We found that RBM10 directly interacts with the Star-PAP. The RBM10 binds to target mRNA and brings Star-PAP polyadenylation complex to specifically process cardiac mRNAs 3′-UTRs. Interestingly, most of these mRNAs encode anti-hypertrophic regulators of the heart and indicate that RBM10 and Star-PAP play a crucial role in cardiac gene regulation. This exciting result made us extend our study to both animal and cell line models of hypertrophy.

We created physiologically relevant models of hypertrophy (CH) and further progression to HF (both by intraperitoneal injection of Isoproterenol, a drug which induces hypertrophy and by a surgical method where an aortic constriction is made to create pressure overload hypertrophy) and cellular hypertrophy in H9c2 cell line (derived from the ventricular region of rat heart) by Isoproterenol. We found the loss of RBM10 during CH and HF in both the hypertrophic models in wistar rat and also in the H9c2 cell line. Similarly, the RBM10 deletion results in a hypertrophy-like response in the H9c2 cell line, and strikingly, the RBM10 re-expression (restoration) results in cellular and molecular level changes and brings back the cell to its normal phenotype. A significant finding of this study is that RBM10 and Star PAP carry out an anti-hypertrophic gene programme in the heart under normal physiological conditions, but under hypertrophic conditions, as a result of the loss of RBM10, the anti-hypertrophic mechanism gets disrupted in the heart. Hence cardiac cells go to the hypertrophic condition leading to heart failure.

This study reports for the first time the significant role of RBM10 in cardiac gene regulation and CH/HF. This study also defines a novel molecular function of RBM10 other than RNA splicing. Our study also reveals RBM10’s role in pathological cardiac hypertrophy and suggests its possible role in cardiac growth/development. Thus, this study exposes a new road for a potential therapeutic application for the prevention of hypertrophic heart from progressing to heart failure by targeting RBM10-Star-PAP controlled gene programme in the heart. Finding a new RNA processing-based anti-hypertrophy gene programme for the maintenance of cardiomyocyte growth would be of great interest to researchers engaged in this field and possibly to those engaged in drug discovery.

This research work was carried out by me under the guidance of Dr. Rakesh Laishram, Scientist EII and Swarna Jayanti Fellow at Rajiv Gandhi Centre for Biotechnology, Trivandrum, Kerala. We have published this significant finding in Cell press journal “Cell Reports” entitled “A splicing independent function of RBM10 control specific 3 UTR processing to regulate cardiac hypertrophy” (2018). 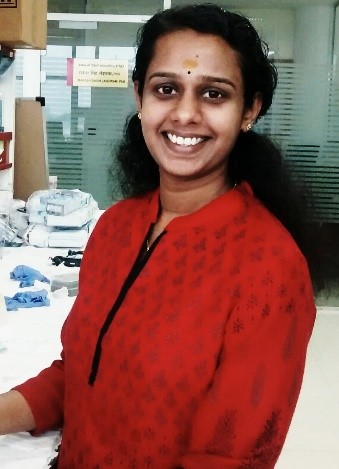