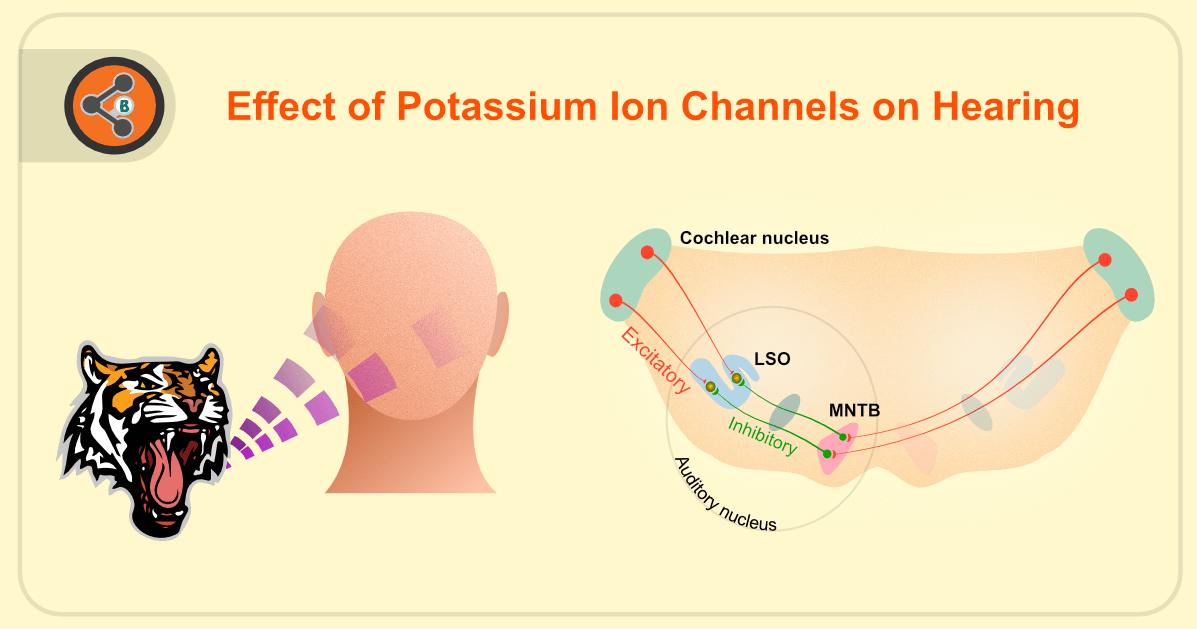 Kv3.1 and Kv3.3 subunits differentially contribute to Kv3 channels and action potential repolarization in principal neurons of the auditory brainstem.

The work was carried out in the group of Prof. Ian Forsythe at the University of Leicester, Leicester, UK.

*Definitions at the end

What was Already Known?

When sound enters our ears, the sound signal gets carried from the ears to the brain cortex via the auditory pathway consisting of several nerve cells. An important step in this pathway is the superior olivary complex (SOC) in the brainstem where sound signals from both ears intersect for the first time [1]. The SOC is made up of small groups of neurons involved in processing information about the sound. These groups, called nucleus*, include the medial nucleus of the trapezoid body (MNTB) and lateral superior olive (LSO). Principal neurons in the MNTB and LSO process information about the timing difference and the intensity (i.e. volume) of a sound stimulus. In response to incoming synaptic activity (either excitatory or inhibitory or both), these neurons are required to fire APs accurately at high frequencies i.e., many APs in a short time. But what are action potentials?

All neurons are characterized by their ability to fire APs in response to synaptic activity. An AP is a change in membrane voltage observed in excitable cells (e.g., neurons, cardiomyocytes) on receiving a stimulus. A typical AP consists of a membrane depolarization* (rising) phase followed by a repolarization* (decaying) phase. With strong synaptic activity, voltage-gated sodium channels on a neuron’s membrane are activated. The neuron is then rapidly depolarized from its resting membrane potential* (RMP) resulting in the rising phase of an AP. With time and increasing depolarization, open sodium channels are inactivated. Simultaneously, the positive voltage now achieved opens the classical potassium channels that repolarize the membrane potential back to its resting state and lead to the AP’s decay phase. This repolarization phase ensures that inactivation of the voltage-gated sodium channels is removed, and they are available for the next AP. This tight regulation of channel activation and inactivation kinetics determines not only the properties of the APs fired (like threshold voltage, maximum amplitude and duration) but also the frequency with which they are fired. 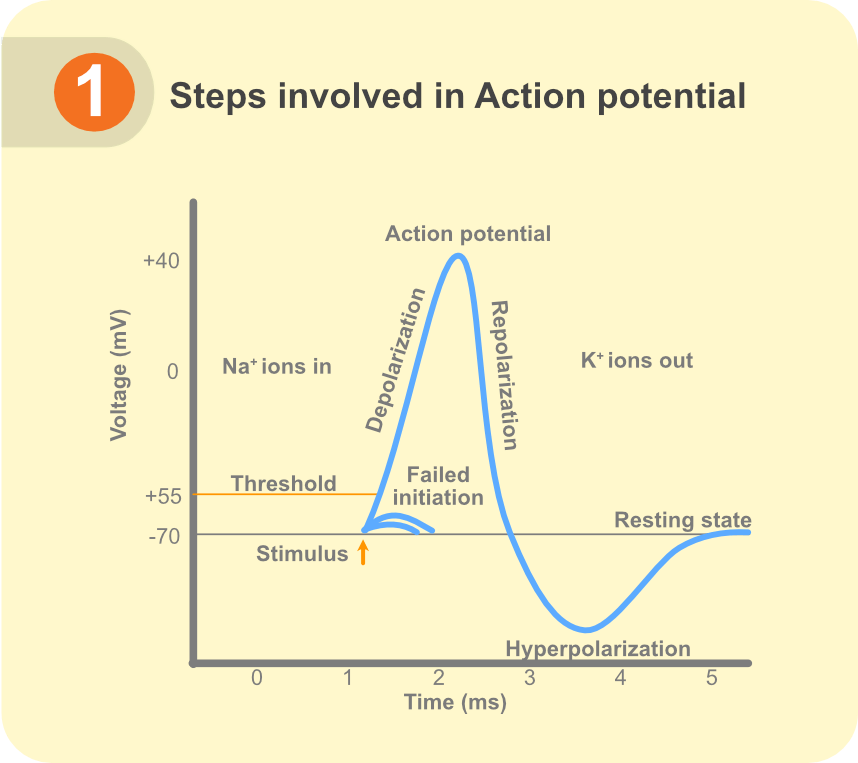 Voltage-gated potassium channels of family 3 (Kv3) are a class of high-voltage activated channels that open during the AP rising phase and drive the membrane potential back towards the RMP. Owing to their properties, Kv3 channels critically contribute to reducing AP duration while increasing the neuron’s ability to fire at high frequencies. Each Kv3 channel protein consists of four subunits which can be of four types, Kv3.1, Kv3.2, Kv3.3, and Kv3.4, in either homomeric or certain heteromeric combinations, each with slightly different biophysical properties [2, 3]. Kv3 channels are widely expressed in the nervous system including cortex, hippocampus, thalamus, cerebellum, brainstem and spinal cord [3]. Inhibitory neurons (interneurons) in these brain regions especially employ Kv3 channels for their fast AP spiking properties [4].

The neurons in the MNTB and LSO nucleus in the SOC are also required to fire APs at high frequencies for successful localization of a sound source like a tiger roaring [5]. Both MNTB and LSO principal neurons are known to express Kv3 channels. Previous in-situ hybridization* studies have suggested expression of both Kv3.1 and Kv3.3 subunits in these neurons [6]. Considering that both subunits are involved in enabling high-frequency firing [2, 3, 4], it is not known if the contribution of Kv3.1 and Kv3.3 subunits to functional Kv3 channels in the MNTB and LSO neurons is different or if the subunits can compensate each other.

What did we Find?

To understand the redundancy between Kv3.1 and Kv3.3 subunits, we tested their mRNA and protein levels, in addition to electrophysiological properties, in MNTB and LSO neurons from mice models. In our mice models, expression of Kv3.1 and Kv3.3 subunit but not Kv3.2 or Kv3.4 subunit was confirmed in the MNTB and LSO regions of wild-type (WT) mice, which was in agreement with previous studies [7, 8]. To further dissect out the subunit-specific role of Kv3 channels, we used knockout* (KO) mice models with either Kv3.1 or Kv3.3 genes silenced which ensured that Kv3 channels in these neurons would be a homomeric combination of the remaining Kv3.x subunit.

To understand the cellular effect of wider APs, we investigated the resulting intracellular calcium levels. Voltage change during an AP is accompanied by the opening of voltage-gated calcium channels which conduct calcium ions into the neuron, resulting in increased intracellular calcium concentration [Ca2+]i. Using fluorescence calcium imaging, we observed that in LSO neurons from Kv3.3 KO mice the now broader APs allowed a larger increase in [Ca2+]i that decayed over longer period of time as compared to WT conditions.

Under physiological conditions, functional Kv3 channels assist MNTB and LSO principal neurons to fire APs at frequencies of 100 Hz (100 APs/second) and above. This allows the neurons to reliably and accurately integrate information about sound from both ears. We tested the ability of these neurons to fire in response to current injection trains of different frequencies ranging from 50 Hz to 400 Hz. We observed that MNTB neurons from WT as well as either KO mice could sustain successful firing at 400 Hz. Meanwhile, LSO neurons from Kv3.3 KO mice increasingly showed failure to fire APs at high frequencies and higher firing latency* over time.

What Does it Mean?

Our study revealed a compensatory mechanism in place in MNTB neurons which allows it to use either Kv3.1 or Kv3.3 subunits to form functional channels. This supports sufficiency of either Kv3.1 or Kv3.3 homotetramers to sustain Kv3 channel roles in MNTB neurons. LSO principal neurons, though expressing Kv3.1 subunit mRNA in the Kv3.3 KO mice, cannot form Kv3.1 homotetrameric channels to successfully maintain AP repolarization and high frequency firing. It will be interesting to explore whether LSO principal neurons require Kv3.3 homotetramers or Kv3.1 and Kv3.3 heterotetramers to form functional Kv3 channels. 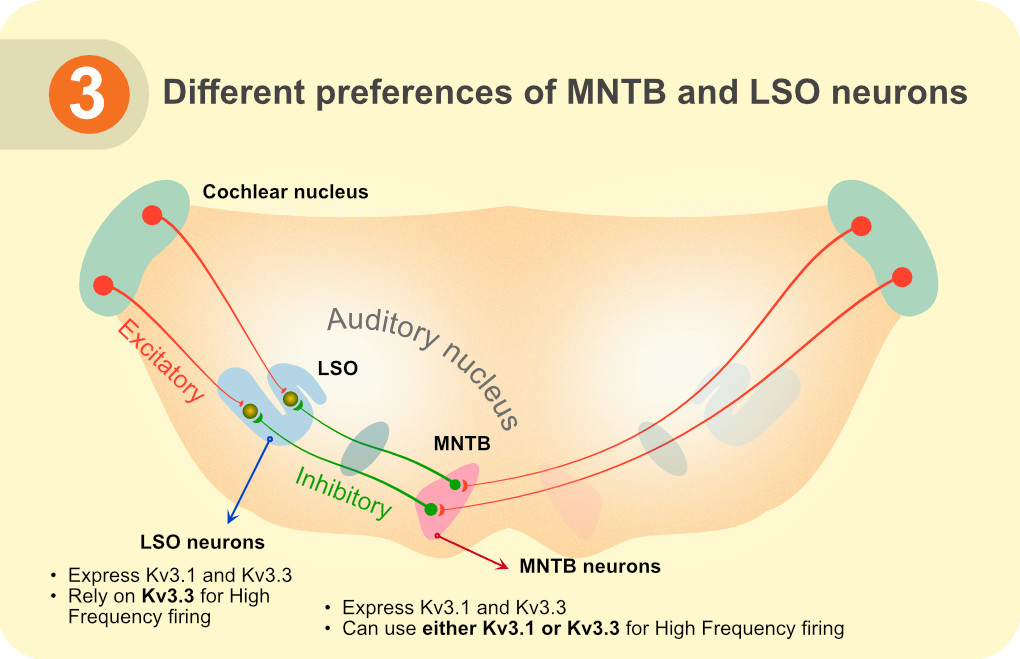 The wider APs in LSO neurons from Kv3.3 KO mice leads to increase in intracellular [Ca2+] that also decays slowly. A condition like this may prove detrimental to LSO neurons by disturbing their Ca2+-dependent pathways. The LSO principal neurons are particularly involved in processing sound intensity. The loss of high frequency firing ability in these neurons and increased latency of AP firing would compromise how excitatory and inhibitory inputs are merged and processed in these neurons. The convergence of both types of inputs and subsequent accurate response of LSO neurons is physiologically necessary as it helps to locate the source of the sound.

Our findings are especially insightful in understanding mechanisms of spinocerebellar ataxia* 13 (SCA13), a disease associated with Kv3.3 subunit mutations [9].  While it is the cerebellum that is primarily affected in ataxia, humans with SCA13 also have trouble detecting changes in timing and intensity of sound, which affects their ability to locate the sound source [10]. It remains to be reported whether, similar to progressive cerebellar damage [11], mutation and subsequent loss of Kv3.3 function in SCA13 can also prove toxic to auditory brainstem neurons. Future studies to understand auditory defects in SCA13 can benefit from the findings of our study which explicitly reveals that unlike MNTB neurons, LSO principal neurons rely primarily on Kv3.3 subunits for their high frequency firing ability. 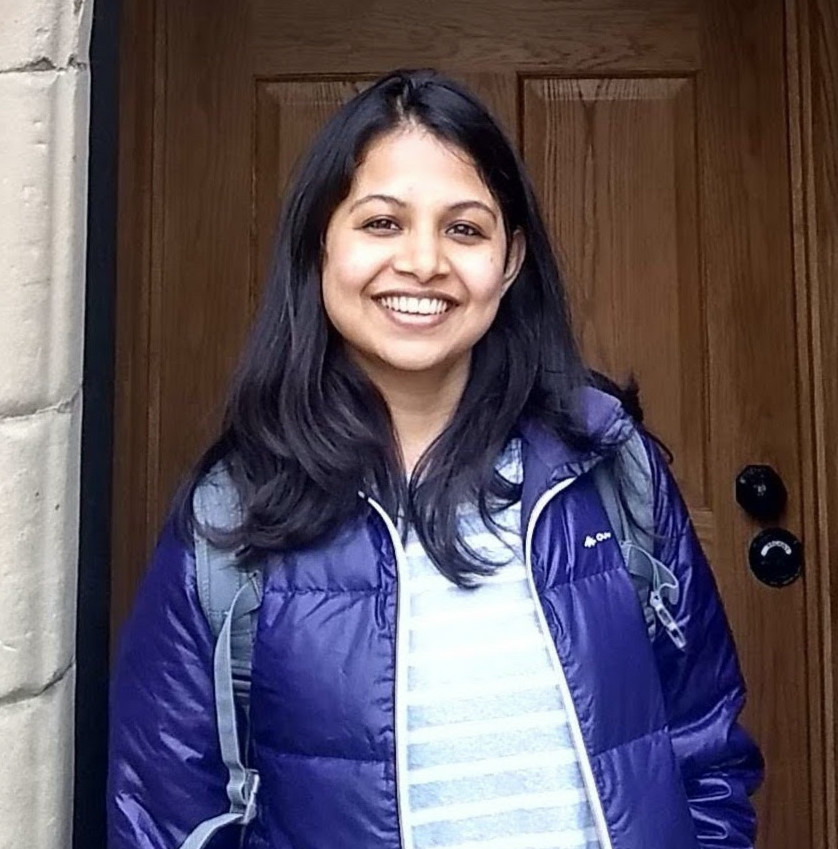 When not actively pursuing research, I like to write about science that happens in our daily life in my blog InEvitable Science.