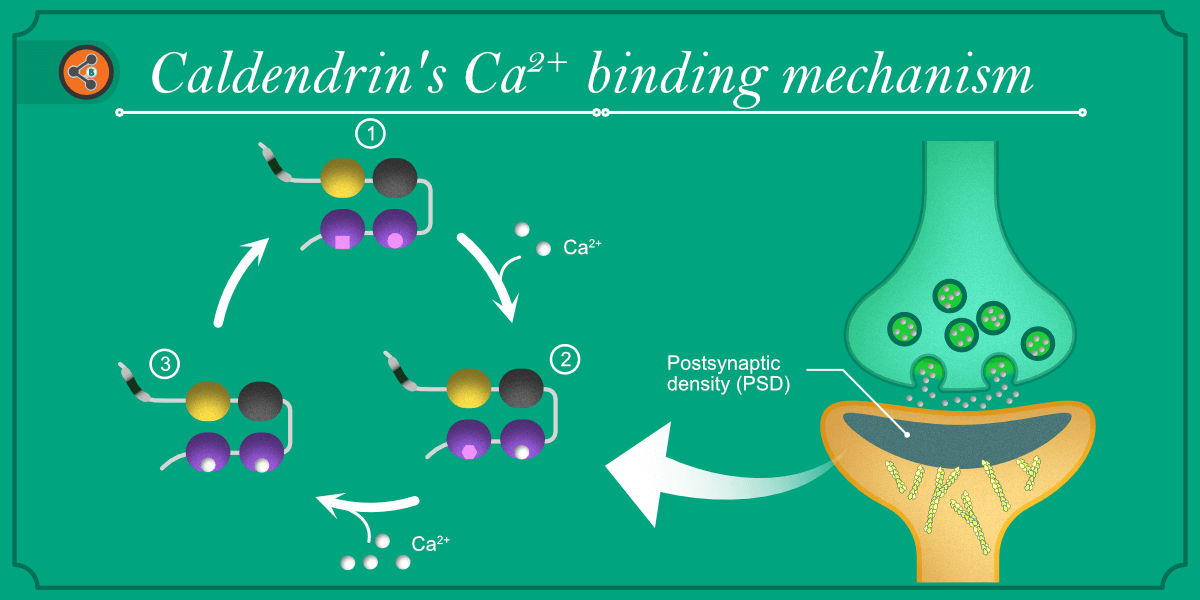 Animal life and survival primarily depend on their ability to respond to the environment around them. These controlled responses are a result of highly specific functions of the nervous system present in an animal. Calcium (Ca2+) is one of the primary signalling molecules which governs the specificity of neuronal functions via controlling at individual neuron (the functional units of the nervous system).

There are two primary classes of proteins called neuronal calcium sensors (NCS) and neuronal calcium-binding proteins (nCaBPs) which play a primary role in neuronal signaling. These proteins precisely sense the change in Ca2+ concentration in neurons and controls the downstream signaling. Here we worked on a vertebrate-specific protein called Caldendrin (CDD), a nCaBP present in dendritic spines, involved in neurotransmission and memory. The mice devoid of CDD exhibit deficits in spatial learning and memory state the importance of the CDD.

Although the CDD was convinced to be important Ca2+ sensor, the mechanism of the calcium-binding was poorly understood. CDD does not show much secondary and tertiary structural changes as it binds to calcium, unlike other calcium sensors, makes it further unique and complex. It is essential to understand the structure of CDD before diving into the mechanism.

CDD has a unique bipartite structure (Fig 1). The N terminal domain is a proline-rich disordered domain, contains seven phosphorylation sites and several PxxP motifs. The C-terminal domain contains 4 EF-hands (Ca2+ -binding motifs). Out of the 4 EF-hands, only 3 and 4 (purple) binds Ca2+.  The EF1 hand (yellow) has a higher affinity for Mg2+ and its ability to bind Ca2+ is not consistent in literature, whereas EF2 is non-functional (grey).

To investigate the structural role of individual EF-hands in the function of CDD, we introduced Tryptophan (Trp, a natural fluorescent amino acid) at each EF-hand (EFs) explicitly. This method is called "EF-hand scanning Trp mutagenesis". In brief, "EF-hand scanning Trp mutagenesis" involves the replacement of specific amino acids one at a time with Tryptophan to study the microenvironmental changes with fluorescence spectroscopy. In essence, the data generated will let us know the ligand binding properties and stability of each EF-hand under experimental conditions.

The fluorescence and unfolding studies of individual Trp reporter proteins led to the finding of unique inter-motif Communication, i.e. binding of Ca2+ at EF3 lead to destabilization of EF4. After the complete saturation of EF3, the EF4 regains its stability. The whole process is mentioned stepwise below.

Further, we have conducted experiments with wildtype CDD (unmodified primary sequence) protein to rule out the possibility of disturbance caused by Tryptophan. The unfolding of wild-type (WT) CDD, was monitored by external fluorophore 8-Anilinonaphthalene-1-sulfonic acid (ANS). ANS when tagged to a protein, reports changes in the microenvironment (relative hydrophobicity) by changing its fluorescence properties.

The data obtained with ANS experiments show the unstable intermediate. At the same time, the CDD transit from apo (without Ca2+) to halo (with Ca2+) states at different Ca2+ concentrations before it reaches the Ca2+ saturated state. These results fortify the findings from "EF-hand scanning Trp mutagenesis".

I am a research scholar from CSIR-CCMB, Hyderabad, India. My research focuses on biophysical and functional characterization of divalent cation binding proteins from prokaryotic and eukaryotic systems. The main objective is to understand the Ca2+ induced structural changes in Ca2+ sensor proteins which is crucial for their diverse functions.