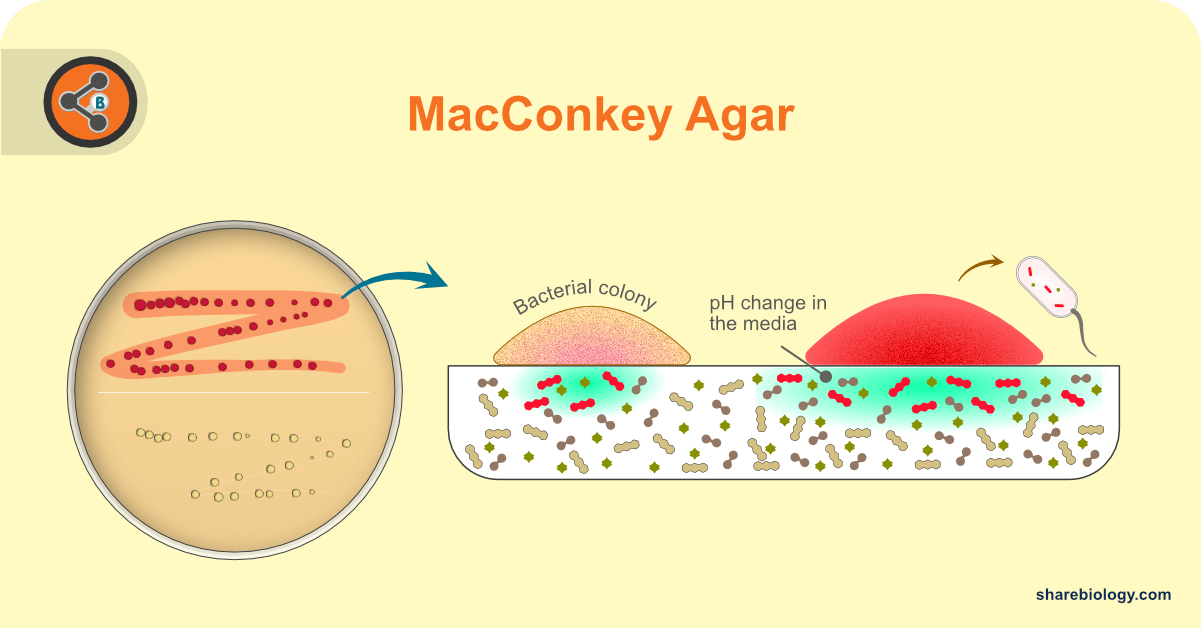 MacConkey agar (MAC) was developed as the first solid differential media in the 20th century by a bacteriologist, Alfred Theodore MacConkey. While working for the 'Royal Commission' on sewage disposal, his role was to inspect drinking water sources for gram negative enteric organisms. These bacteria usually inhabit the gastrointestinal tract of humans and other animals. Their presence is an indicator of fecal contamination and could indicate the presence of potentially pathogenic bacteria.

MacConkey agar is a selective and differential media used to isolate non-fastidious gram negative rods (primarily, the family Enterobacteriaceae and the genus Pseudomonas) and differentiate the bacteria on their ability to ferment lactose. 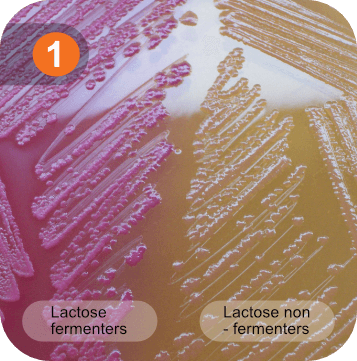 Peptone: Nitrogen source, also works as a carbon source for bacteria that can not metabolize sugars.

Neutral red: A pH indicator that acts as a litmus paper. Turns to red/pink when pH drops below 6.8.

Lactose: A sugar that works as a carbon source. Some bacteria consume lactose and produce acids (lactose fermenters). When the acids are released into surrounding media, media pH drops.

The color of colonies in MacConkey agar is based on their ability to change the pH of the media. For more details on pH changes, read EMB Agar.

Strong lactose fermenters: Escherichia coli is a typical example of this group. These bacteria drastically change the pH of the surrounding media to acidic, changing the color of neutral red and precipitating the bile salts. The dye is also taken up by the bacterial cells resulting in the pink colonies, and the precipitation of bile salts results in a ‘pink halo’.  A ‘Pink halo’ is a narrow white region at the pink color junction (produced by colonies) and the pH-unaffected area.

Weak lactose fermenters: Serratia and Enterobacter aerogenes are an example of this group. These species change the pH of media to acidic but not as much as the strong fermenters do. The drop in pH is just enough to change the color of the indicator dye. These bacteria also take up the dye, giving a pink appearance to colonies. However, they do not drop the pH of the media to the extent of bile salts precipitation.

Colonies that do not change the pH of media: Salmonella, Proteus species, Yersinia, Pseudomonas aeruginosa, and Shigella are examples of this group. These bacteria do not ferment lactose; hence neutral red does not change to pink. Some of these bacteria can change the pH to alkali due to protein deamination. Increasing the pH of the media may result in a change in the color of media to yellow as neutral red turns yellow at alkaline pH. 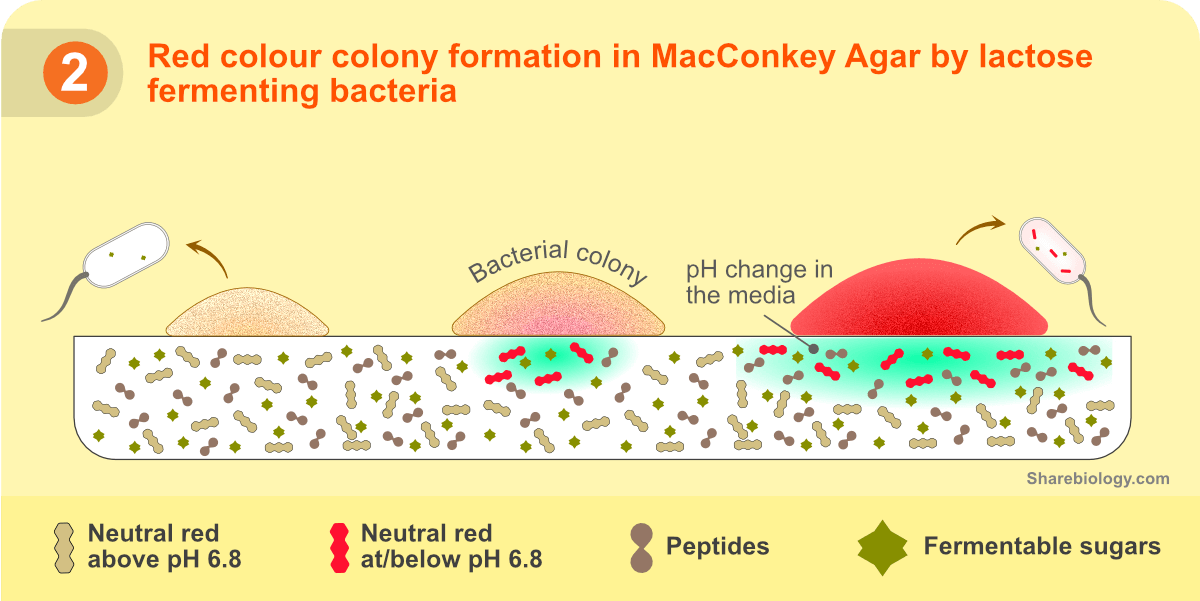 As per the necessity of the user, the fermentable sugar lactose can be replaced in the medium by other sugars. The ability of gram negative bacteria to ferment these replacement sugars is analyzed in the same way as is lactose fermentation.

Alternatively, the commercially available MacConkey agar media powders can be used. Weigh the mixture of content as prescribed by the manufacturer.

Store the media plates at 4°C until they are utilized.

Add agar after adjusting the pH of the media. At acidic pH, agar hydrolyzes and results in soft agar plates.

Interactions between Bacteria and Bile Salts in the Gastrointestinal and Hepatobiliary Tracts.