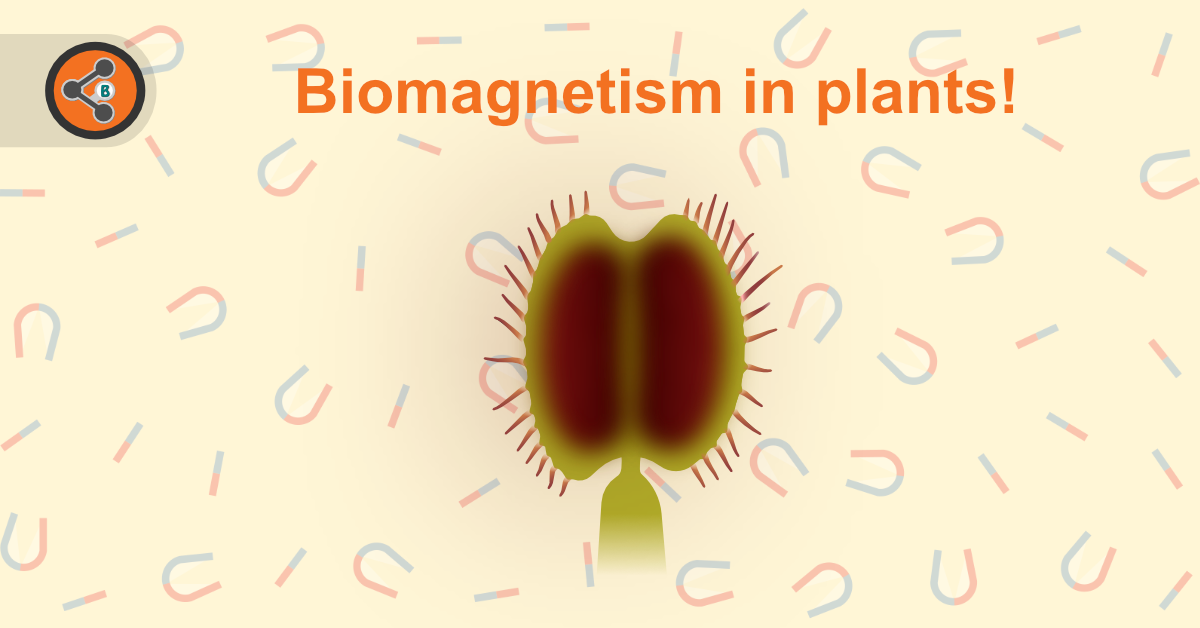 Carnivorous plants are exceptional in exhibiting fast organ movement, unlike most other plants,  like closing the trap to catch a nutrient-rich animal. One such carnivorous plant is the Venus flytrap (Dionaea muscipula) which has a bilobed trap. The trap is the modified upper part of the leaf and has three equally spaced hairs that sense the prey upon contact. How do plants perceive this contact information to close the trap?

In animals, neurons carry sensory information via action potentials (electric signals), leading to mechanical movements. These action potentials, in turn, generate the bio-magnetic responses detected by Superconducting Quantum Interference Device (SQUID). A lot of these biomagnetism studies were done in animals and plants. However, the implications of biomagnetism in plants remain elusive.

In this paper, Fabricant et al. have established a system to measure biomagnetism in a non-invasive way and showed that biomagnetism could be used to study systemic signals in plants. First, the authors established a system to measure the action potential in response to temperature. They identified that the action potential could be fired at temperatures greater than 30 °C and increased to a maximum at 40 °C. Based on their experimental observation, the authors reasoned that the calcium ion channels open up more at the higher temperatures leading to the firing of action potential upon the heat stimulus.

Comparison of electric and gradiometric signals.

As the relation between the temperature and action potential was well established, the authors used this thermal stimulation to measure the electric and magnetic responses in the Venus flytrap simultaneously. For this, the authors used QuSpin Zero-Field Magnetometers (QZFM) and performed the experiments in a magnetically shielded walk-in chamber. The authors observed a temporally overlapped electric and magnetic response suggesting that the magnetic signal is the effect of the electric signal. Thus, the authors successfully established non-invasive, custom-sized magnetometers to detect biomagnetism in plants. This method can be extended to detect the bio-magnetic responses during biotic and abiotic stresses in the future.

*The Image (Comparison of  electric and gradiometric signals) is taken from the original article fig 5.

I am a Fleming postdoctoral associate at Adrienne Roeder’s lab, Cornell University trying to understand the giant cell patterning in Arabidopsis sepals. Besides, I am also interested in science communication stiving to writing scientific discoveries in a discernable manner to reach a broader audience. I am currently an assistant feature editor to “The Plant Cell”, Plantae fellow, and recently started writing for Share Biology. Apart from science, I enjoy photography, cooking, traveling, and reading. You can reach me at @Vijaya_Batthula and know more at batthulavijayalakshmivadd.com